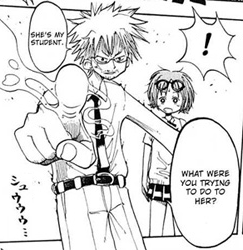 Detention? You'd be getting off easy.
Abraham: Feigned frailty, no "En garde"... Have you no honor?
Raven: The lives of my students are more important. Besides which, I did warn you.
— El Goonish Shive
Advertisement:

Sometimes you have a teacher who is not a sadist, particularly strict, or overly nice. They are just a regular teacher. Maybe. Until you threaten their students. After that you might want to start praying to whatever god is out there for mercy. You do not mess with their students. Getting away with just a lecture is not an option. Detention, even less. And don't even think about getting off with a warning. These are the teachers that make you wish they'd leave discipline up to the principal.

Usually they're the Non-Action Guy (or Girl) type, or a Nerd. Often they're well-respected and popular with their students (though this isn't always the case). This is also common with Evil Teachers who actually like their day job. Anyone who runs a martial arts school is almost certainly also this trope, since their entire day job is teaching students how to fight anyway.

If a Hippie Teacher or a Misplaced Kindergarten Teacher is prone to this, running away as fast as possible is probably a good idea. If the school in question is run by a church, it might overlap with Badass Preacher.

Usually not Truth in Television, as any real teacher who behaved this way would in most cases lose their job and become a Fired Teacher — but see the Real Life examples below.

For the parenting equivalents, see Mama Bear and Papa Wolf. For an older sibling who acts like this, see Knight Templar Big Brother. Can overlap with Beware the Nice Ones, and occasionally Badass Normal in worlds with Supers. For a similar character, see Badass Bureaucrat. Contrast Sadist Teacher.