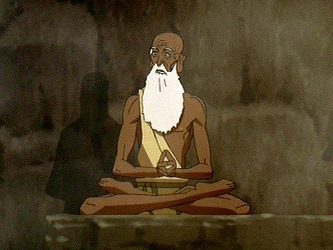 Death is but an illusion... and so are shoes.
Advertisement:

The archetypal character of a sage, a mentor, an oracle, a wise person

is sometimes given an unusual additional trait: an aversion to shoes. It may be because of religious asceticism, special connection to nature, or just general eccentricity. Whatever the cause is, the lack of footwear (especially in public places) makes the character look singular and different from everyone else, and therefore may serve to emphasize that they know and see more than an ordinary person does, and is just too wise to care about social conventions. The religious connotations (like the said asceticism, or "bare feet on holy ground") may also come in handy.

There is also a seemingly practical thought regarding one particular issue; if the character has a hermit-like mentality and is depicted as never really moving from one spot (like meditating in one particular spot), then the need for having shoes is kinda moot and they'd might as well air out their feet. This logic however is fairly Fridge Logic-inducing since it implies that they are so far into their religious or academic pursuit that they never need to move around even to satisfy the most basic of human needs such as eating, sleeping, or pooping. This can arguably be seen as a weird combination of Conservation of Detail and Establishing Character Moment, since if we'd only see these isolated characters as they interact with other people who sought them out, then it would be easier and quicker to establish their devotion to the particular lifestyle by catching them exactly in the act of the aforementioned lifestyle that makes them stand out to the rest of society.