Video Game / The Trader of Stories 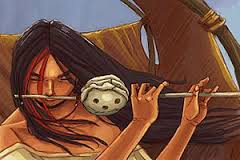 The Trader of Stories (also known as The Big Old Tree That Dreams) is a series of indie Adventure Games set in the very beautiful world of Forest Bed. The games, produced by the Polish brothers Marek and Marcin Rudowski [1]

are of the point-and-click sort and web-based — just click the link to play.

The first installments star a young woman named Myosotis, a traveler who makes it her business to buy stories from people — because, suffering from a severe case of Laser-Guided Amnesia, she hopes to find the story that is her own. Word of God says that future games are going to have a more diverse cast. In flashback / story sequences of the prequels the player characters are the protagonists of the particular story, eg. for Willow's part of Chapter I the point-of-view character is Willow.

The developers' blog is found here

The series so far consists of:

Tropes in The Trader of Stories: