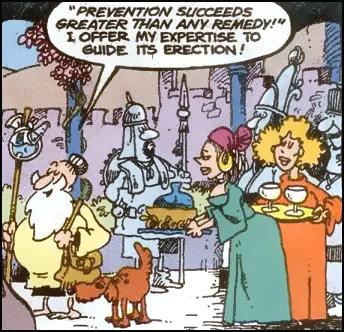 The tendency of sages, mentors (especially eccentric mentors), and characters who are wise or spiritual to speak in proverbs, riddles, old sayings, and flowery metaphors.

The trope used to be popular in Medieval Western culture (people often had to speak in Riddles or metaphors to demonstrate their wisdom, and it even was a part of initiation rituals and marriage customs

), and retained its popularity even in the sixteenth century: for instance, the English queen Elizabeth I was extremely fond of proverbs and wordplay, and during her reign, the abundant usage of them was seen as a sign of wisdom and sharp wit (the whole England was "soaked in proverbs"). However, it was increasingly seen as a Discredited Trope in the Western world since the age of Enlightenment when the role of folklore and "folk wisdom" declined: most notably, Lord Chesterfield wrote that "a man of fashion never has recourse to proverbs and vulgar aphorisms". Nowadays the excessive use of proverbs is considered trite and cliche, typical for elderly people and those who want to seem more thoughtful than they are; likewise, using riddles and metaphors can be seen as a sign that the speaker has nothing substantial to say.

Nonetheless, the trope remains very popular in Eastern culture; the best known example is probably Zen koans which have no definite answer and serve as "thought exercises" to make a person think "outside of the box". Therefore in modern pop culture, a sage who speaks in a flowery and metaphoric fashion is usually of Eastern origin or related to Eastern spirituality (for instance, Yoda, while being non-human, has all the stereotypical features of an Oriental monk).

Sub-Trope of Cryptic Conversation, and often overlaps with Delighting in Riddles. Can be deconstructed or parodied, when the said character simply pretends to be wise, and speaks in Ice Cream Koans. Compare and contrast Spock Speak, Technobabble, and Sesquipedalian Loquaciousness, when "scientifically smart" and tech-savvy characters use lots of technical and encyclopedic terms. See also Appeal to Familial Wisdom.