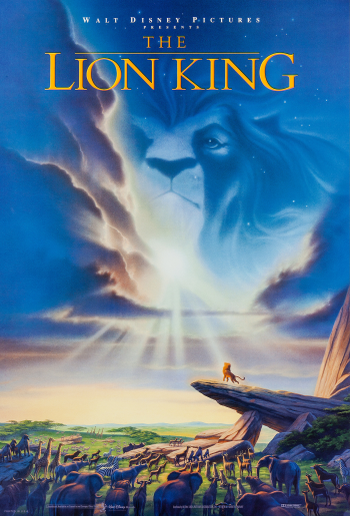 'Til we find our place
On the path unwinding
In the Circle
The Circle of Life
"Nants ingonyama bagithi Babanote Here comes a lion, Father.
Sithi uhm ingonyama."note Oh yes, it's a lion.
— isiZulu chorus, "Circle of Life"
Advertisement:

Released in 1994, and to date, the fourth most financially successful film in the Disney Animated Canonnote Bested only by Frozen, Zootopia, and Frozen II, two decades later, making it the studio's most successful traditionally animated film.; and its 32nd entry.

The Lion King tells the story of a lion cub named Simba, heir to the throne of Pride Lands. Simba is tricked by his jealous uncle, Scar, into believing he set into motion the events that led to the death of his father, King Mufasa. Simba flees the Pride Lands in shame, but is saved from certain death in the wastelands by two wisecracking animals who raise Simba under their responsibility-free philosophy of "Hakuna Matata" ("no worries"). However, when Simba meets his childhood friend Nala years later, he must decide whether to continue his carefree existence or return to the dying Pride Lands and reclaim his throne from Scar's treacherous and iron-pawed rule.

A plot described by some as Hamlet, Macbeth and (debatably) the Malian epic Sundiata Keita, with a few hints of Henry IV, but with animals. The sequels seem to follow the Shakespearean trend, as The Lion King II: Simba's Pride is Romeo and Juliet and Macbeth With Nearly Normal Animals In Africa, and The Lion King 1½ resembles Rosencrantz and Guildenstern Are Dead (a Perspective Flip of Hamlet, written in the 1960s).

The original film's success led to a massive franchise that includes two TV series, a video game for Sega Genesis and Super Nintendo, and the third-longest running and the highest-grossing Broadway musical of all time. It remains one of Disney's biggest animated cash cows to this day; in 2011, The Lion King received a re-release in Disney Digital 3D

, which became the first re-release of a movie since the 1997 re-release of Return of the Jedi to hit number one at the box office.

One of the approximately 40 foreign dubs of this movie, incidentally, was in Zulu, and it remains the only Disney movie to ever have been dubbed in an African language.

In mid-late 2016, hot off the success of their live-action/CGI hybrid remake of The Jungle Book, Disney and Jon Favreau announced a photorealistic CGI remake of The Lion King, released on July 19, 2019. That film has since become the highest-grossing animated film of all time, proving the reigning popularity of this franchise.

The album for the soundtrack now has its own page.

The Lion King provides examples of:

Mufasa: Everything the light touches is TV Tropes.
Simba: Wow. But what about that shadowy place?
Mufasa: That's the Darth Wiki. You must never go there, Simba.

It's In the Past

It's In the Past