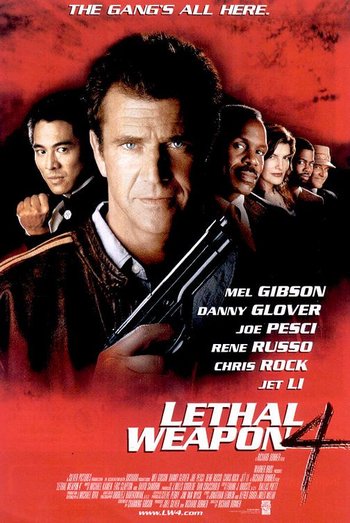 Lethal Weapon 4 is an action / buddy cop film and the the fourth instalment of the Lethal Weapon series. The last to be directed by Richard Donner, it was released in 1998 and stars Mel Gibson, Danny Glover, Joe Pesci and Rene Russo once again.

Lorna is pregnant with Riggs' baby and both he and Murtaugh are contemplating the implications of growing older. Meanwhile, Riggs and Murtaugh receive a brash younger detective named Lee Butters (Chris Rock) and are dealing with Chinese Triads when they uncover a boatload of illegal immigrants.

The Dragon (In Chief)/Big Bad of this group is Wah Sing Ku (Jet Li), by whom Riggs finds himself entirely outmatched.

The "75 Years" variation of the Warner Bros. Pictures plays, but the shield explodes when the logo is finished.

The "75 Years" variation of the Warner Bros. Pictures plays, but the shield explodes when the logo is finished.