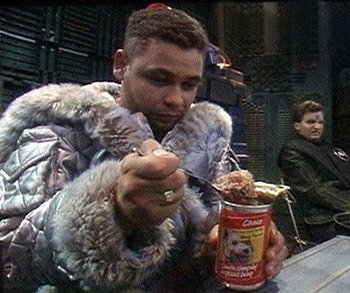 Still better than pot noodles.
"Do you know what dog food tastes like? Do ya? It tastes just like it smells...delicious!"
— Tyrone Biggums, Chappelle's Show
Advertisement:

A character is so down-on-his-luck, so pathetic, so damn broke that they are reduced to actually eating dog food. Bonus loser points if it isn't even good dog food.

Sadly, this is Truth in Television - some people are reduced to eating dog food out of desperation. Realistically, depending on what area you live in and what standards you hold, pet food may or may not be more expensive than human food. Pet food is almost universally available in bulk while it can be harder to find human food in such quantities. However, if you have a Sam's Club or whatever near you, chances are you can buy the same amount per ounce of soup or Ramen Noodles as you could buy pet food, especially in a jurisdiction that puts sales tax on pet food but not human food.

The nutritional requirements for humans and dogs are very similar, so as long as a person added vitamin C tablets to the dog food, they could be perfectly well-nourished eating a good-quality dog food. A desperate person probably won't be thinking about this, however, and the lack of Vitamin C would apply equally to someone buying ramen and spam.

Of course, there are significant quality issues. Some pet food companies spend the money for feeding trials and research, and produce foods that are more nutritious than ramen noodles and spam. However, the minimum standards required by FDA regulations are pretty minimal, and some Veterinary Nutrition professors claim to be able to meet them with an old leather shoe and a can of motor oil — the nutrients have to be present, but the company only has to prove they're digestible and absorbable if they put a claim about feeding trials on the label. Pricing is often much more market-driven than cost-driven, meaning a company may produce a "super premium" food that costs ten or twenty times their low end food, but they could both be crap, or both be excellent.

Note that there still are some FDA standards for pet food partly because it was known that human beings do eat pet food sometimes due to cost issues, and because some food-borne illnesses can be passed from pets to people. The official name for some ingredients cover such a wide variety of parts of the animal that it can be impossible to tell from the label alone whether a food contains nutritious organs of the sort predators go for first given the chance, or unhealthy bits humans can't digest even mixed into hot dogs. note Modern technology makes it even more complicated, as some foods for pets with food allergies use hydrolyzed proteins, broken down into such small fragments that the immune system can't recognize them but the body can still make use of them; this means they can use normally completely indigestible sources of protein such as feathers, and as long as they put the amino acids in the right balance, they can end up with a highly nutritious food that saves the lives of pets that would be euthanized otherwise — but those diets are currently very expensive to make and thus won't be on the menu for this trope!

A form of Too Desperate to Be Picky. The inverse of Improbable Food Budget, and tends to pop up in a Broke Episode. A form of I Ate WHAT?!. Because they're eaten with relish, Scooby Snacks don't count. Characters even more poor and desperate than this may be Reduced to Ratburgers instead. The accidental version is Eating Pet Food. Eat the Dog cuts out the middleman.

A subtrope of Poverty Food. This trope can also pop up in grittier works set After the End, as showing a desperate hero chowing down on dog food is definitely one way to illustrate what a Crapsack World it would be with civilization gone.