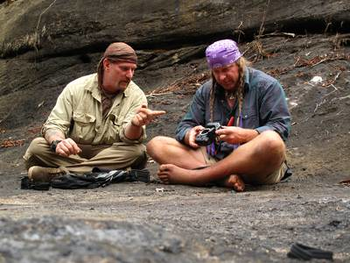 A Discovery Channel show in the same vein as Survivorman and Man vs. Wild, with the draw of offering two experts with very different backgrounds trying to live together while showcasing their individual talents and methods for survival. Yes, it is in fact The Odd Couple meets Man vs. Wild.

Going into its seventh season, the show is now hosted by Grady Powell (a former US Army Green Beret) and Bill McConnell (a primitive survival expert, continuing the show's Odd Couple approach to survival situations. The show now places new emphasis on a 72 hour survival window (citing statistics saying that chances of survival significantly drop beyond this time period) that the hosts must endure.

The show originally featured Cody Lundin and Dave Canterbury demonstrating their differing philosophies towards survival. Cody, is a hardcore naturalist who has worn neither shoes, long pants or underwear in the past 22+ years and attempts to live in harmony with nature as much as humanly possible. His partner for the first two seasons, Dave, is an army veteran and professional hunter, along with being every gruff southern stereotype that has ever existed.

Dave was replaced in Season 3 by Joe Teti, a former special forces operator.

Cody Lundin was fired by Discovery in February 2014. According to Lundin, it was due to differences over health and safety concerns. He was replaced by Matt Graham, a primitive survival specialist who is even more hardcore about being close to nature than Cody is.