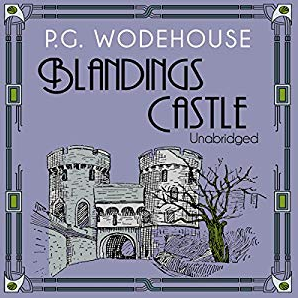 Blandings Castle is the setting of a series of novels and stories by P. G. Wodehouse.
Advertisement:

Blandings, a castle which "has impostors the way other places have mice", is the home of the elderly and ineffectual Earl of Emsworth, a simple, amiable and much-confused fellow whose ambitions in life rarely extend much further than tending to "The Empress of Blandings", his prize-winning pig, and avoiding his many domineering sisters or his terrifyingly efficient personal assistant, who generally have higher ambitions for him. This means that his house is routinely used by his many domineering sisters to imprison nieces or nephews intent on an unsuitable marriage. The would-be fiancé has to infiltrate the castle in disguise, often with help from the Earl's ne'er-do-well brother Galahad Threepwood, and capable, sporting butler Sebastian Beach, or less often his good friend Frederick Altamont Cornwallis Twistleton, Earl of Ickenham, who aims always to spread sweetness and light, and persuade Emsworth to overrule his sister. In general, the novels tend to position the Earl as more of a background figure occupying his own little subplot at most, whereas the short stories tend to revolve around his misadventures specifically.

The second Blandings novel, Leave It to Psmith, is also the last installment of the Psmith series.

The Blandings series has seen Clive Currie and Horace Hodges as Lord Emsworth in movie versions, and Fritz Schultz (in German), Sir Ralph Richardson, Peter O'Toole and Timothy Spall on television, although many regard the BBC radio Lord Emsworth, Richard Vernon (who also lent his voice to Slartibartfast), as definitive.