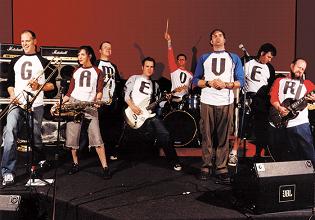 "Five Iron is stupid and
You are if you like them also!... too."
We've been given superpowers,
ask us for an autograph.
We sing, we dance,
we make you laugh.
Don't you want to be like us?
—Five Iron Frenzy, "Superpowers"
Advertisement:

Five Iron Frenzy is an eight-piece rock band from Denver, Colorado, that formed in 1995. Initially they played straightforward ska-punk, though the albums after their first saw them mix this with a more mainstream rock sound (or, on All The Hype That Money Can Buy playing Genre Roulette) while keeping the horn section. On their 2001 album Five Iron Frenzy 2: Electric Boogaloo, they again rebranded themselves with a harder, heavy metal-influenced sound (while still keeping the horn section), and kept this style for the remainder of their career. (They continued playing their old songs at live shows, but in the style of their new songs.) In January 2003, they announced that the time had come to move on with their lives and call it quits before they could start hating each other. They recorded one more proper studio album, went on a nationwide farewell tour, and played their final show before a capacity crowd at the Fillmore Stadium in Denver.

Any rumors of a reunion were almost certainly lies... at least until on November 22nd, 2011, eight years exactly after their final show, the band announced that they were reuniting to record a whole new album, funded by a Kickstarter project, which reached the $30,000 goal in less than an hour, then doubled. Then tripled. And so on, ad nauseam, and Five Iron Frenzy became the highest funded musical Kickstarter project up to that timenote An Amanda Palmer project later surpassed them, raising more than $207k before the Kickstarter drive ended.

FIF's birth coincided with the late-90s' simultaneous punk-rock boom and Third Wave of ska. While they didn't exactly ride the wave to outrageous fame and fortune (their greatest publicity was when their song "Oh Canada" was played on Boston Legal... two years after they broke up), they did gain a respectable cult following in both the punk scene and the Christian rock scene.

Yes, Five Iron Frenzy is a Christian band, and a good one. Their lyrics are frequently satirical (and rarely preachy), and skewer society at large, Christian hypocrisy, the punk rock scene, and their own selves with equal aplomb.

Aside from the departure and replacement of one guitarist, the line-up remained steady for all nine years of their career:

Also, four of their CDs (Our Newest Album Ever, Quantity is Job 1, Proof that the Youth are Revolting, and The End is Near Here) featured some awesomely surreal original artwork by Doug TenNapel.

Compare and contrast with their side project, Brave Saint Saturn.

Other tropes associated with the band or their songs: