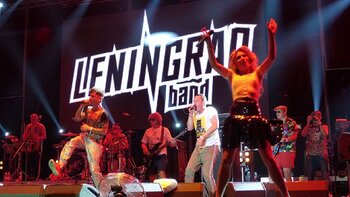 Not to be confused with the Leningrad Cowboys.

Leningrad (Ленинград), or Gruppirovka Leningrad, is a Russian Ska Punk band from St. Petersburg, Russia (formerly known as Leningrad, as you may know) led by Sergei Shnurov. Since their start in the late '90s, they've evolved considerably. However, their signature obscenity ridden lyrics and rich brass sound has remained largely the same. Their lyrics largely revolve around alcohol and women, however, they also touch in on more serious things, such as politics and social problems like police brutality.