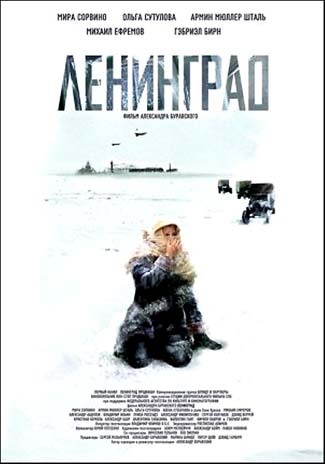 Leningrad, aka Attack on Leningrad, is a 2009 film directed by Aleksandr Buravsky.

, namely the first winter when conditions were most horrific. Kate Davis (Mira Sorvino) is a British journalist who, along with her lover and fellow journalist Phillip Parker (Gabriel Byrne), flies into Leningrad for what is supposed to be a one-day tour of the battlefield. The journalist bus is near the front lines when it takes a direct hit from a German bomb. With Kate reported dead, a mournful Phillip goes back to Moscow.

But Kate isn't dead! She had lagged behind and wasn't in the bus when it blew up. A concussed Kate staggers around for a while until she is picked up by a truck. She eventually comes into the custody of Nina (Olga Sutulova) a young NKVD cop. Nina informs her superiors, and is shocked to be told that since the NKVD reported Kate dead, she has to stay dead. Nina hides Kate in the apartment of her sister Sonya and Sonya's children Sima and Yura. Together, they endure the terrifying siege, in which the Germans deliberately set out to starve the city to death.