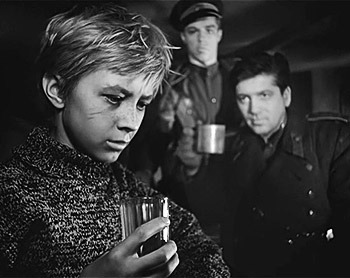 Ivan's Childhood (Ива́ново де́тство, sometimes called My Name Is Ivan in the Anglosphere), is a 1962 Soviet Russian film directed by Andrei Tarkovsky. It is based on the 1957 short story Ivan by Vladimir Bogomolov.

The film tells the story of an orphan boy named Ivan (played by Nikolay Burlyaev) and his experiences during World War II. Ivan was orphaned by the war—his father was a border guard who probably died on the first day of fighting, and his mother was killed by the Germans when they reached his village. Now Ivan, still a boy in his early teens, is a spy who infiltrates the German lines and brings back intelligence for the Red Army. His handlers, including Capt. Kholin and Lt. Galtsev, want to get Ivan out of harm's way by enrolling him in a military academy, but Ivan refuses to quit espionage work, because he thirsts for revenge.

Ivan's Childhood was Tarkovsky's first feature film. It won him critical acclaim and made him internationally known.