Film / It Happened in Athens 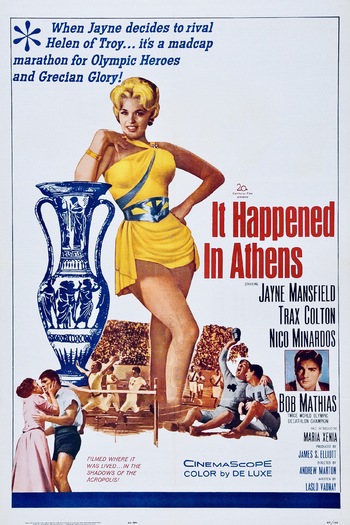 It Happened in Athens is a 1962 American-Greek romantic comedy-drama film directed by Andrew Marton. It is a highly fictionalized account of Spiridon Loues's marathon victory at the inaugural modern Olympic Games of 1896.

Spiridon Loues (Trax Colton) is living the simple life of a shepherd in rural Greece when he hears that, after many centuries, the Olympic Games have come back. Thus, he sets off for Athens, hoping for a chance at Olympic glory. Once there, he befriends Christina Gratos (Xenia Kalogeropoulou, credited as "Maria Xénia"), a Girl Next Door from his hometown. Christina works as a maid for Eleni Costa (Jayne Mansfield), a glamorous Greek actress who, for a publicity stunt, has declared that she will marry whoever wins the marathon. This is somewhat upsetting to her lover Lt. Alexi Vinardos (Nico Minardos), but she assures him that, of course, he will be winning the marathon anyway. Or will he?