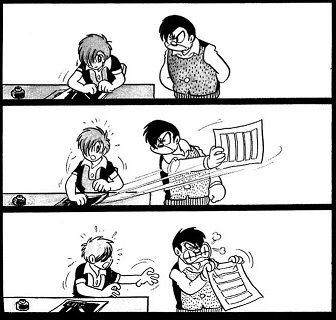 "No son of mine is going waste his time making these silly drawings!"
Father: I got a call from your math teacher yesterday. She says that you were...drawing horses in your math book.
Bastian: Unicorns. They were unicorns.
Father: Stop daydreaming. Start facing your problems.
— The Neverending Story
Advertisement:

A father, mother, or guardian (these last two are less common) disapproves of their child or ward reading "fairy stories", playing fantasy or sci-fi games, sports, and even such "useless" hobbies as astronomy, boxing, and being literate. In extreme cases, anything the child likes that isn't directly and concretely tied to whatever it is their parent does for a living (or that they want them to do for a living) is seen as an utter waste. The parent may even confiscate and dispose of anything of this nature their child owns. The child may then be grounded and/or deprived of money in a bid to prevent any clandestine attempts to continue the offending hobby. If the setting is one where Don't Make Me Take My Belt Off! is likely to come into play, expect the parent to tell the child that they will have "that nonsense" beaten out of them.

"Fantasy" in this trope isn't about the genre, but "fantasy" from the parent's perspective. To the Overprotective Dad or My Beloved Smother, any and all of these "distractions" are a Tragic Dream waiting to happen that will ruin their child's chances at life. For narrative purposes, this is basically anything that the kid likes that'll move the plot forward via alienating them from their parent (possible later reconciliation optional but heartwarming), which puts the Fantasy-Forbidding Parent into an antagonist role, though with rare exceptions he or she is not a true villain.

In many cases, the parent probably sees their actions as being Cruel to Be Kind by steering their child away from an "unsuitable" interest but is too close-minded or too terrified to consider that there are many valid careers and hobbies for their child and that the child should (within reason) be allowed to make their own decisions. In these cases, the parent does come around to accepting their child's interests and vocation with a little coaxing. If the kid later really hits the big time in those fields, the parent will probably shake their head wondering in astonishment how that is possible. However, with some more consideration as the parent sees their child's success with their talent, some apologies for their stubborn doubts and statements of pride are usually in order.

A more sinister possibility is the dad/mom is trying to somehow make their child co-dependent or at least clip their wings so they never leave or get out from under their thumb, either forcing them to follow a family legacy or just out of sheer malice.

Unfortunately, this is Truth in Television.

See also "Well Done, Son" Guy and Tough Love. Compare Education Mama and The Killjoy. The Wet Blanket Wife is the spousal equivalent of this trope, who forces you to give up adventuring and settle into a normal boring domestic life. A close-minded Caretaker usually takes this attitude. Keep an ear out for "You Watch Too Much X." Contrast Obsessively Normal, wherein not only does the "fantasy" usually has a more direct effect on the people and the setting, but the parent trying to forbid it occasionally may escalate a bit too much in their quest. May result in Strict Parents Make Sneaky Kids. Don't confuse with the Supernatural-Proof Father (in that trope, the father resists supernatural elements that genuinely exist in the world of the story.)

Abraham Simpson has shot down Homer's dreams from a very young age.

Abraham Simpson has shot down Homer's dreams from a very young age.