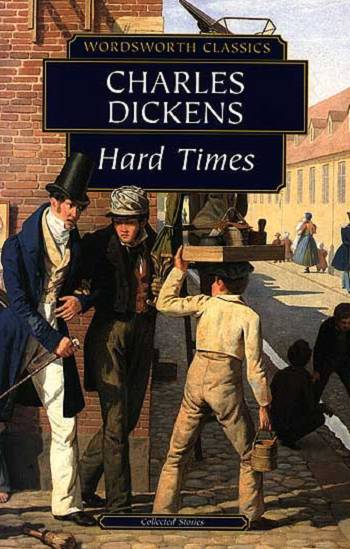 Now, what I want is, Facts. Teach these boys and girls nothing but Facts. Facts alone are wanted in life. Plant nothing else, and root out everything else. You can only form the minds of reasoning animals upon Facts: nothing else will ever be of any service to them.
Advertisement:

Hard Times is a novel by Charles Dickens, which savagely and relentlessly rips apart the school of Utilitarianism and its applications to the working man. Mr. Gradgrind dictates that the school of his little town shall teach nothing but facts — strict and severe, exact and all-encompassing. He indoctrinates this teaching in his two children, Louisa and Thomas.

Meanwhile, Stephen Blackpool, one of the dehumanized "Hands" who work in the town's factories, is living a hard life, and merely trying to get by, while staying close to his dear Rachael and avoiding the threatening unions.

In short, times are hard.