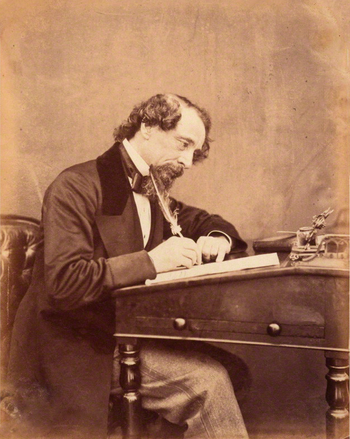 "There are books of which the backs and covers are by far the best parts."
Advertisement:

Charles John Huffham Dickens (7 February 1812 – 9 June 1870) was the foremost English novelist of the 19th century, and remains to this day one of the most famous authors in the English language.

He defined Victorian London, but actually started writing before Queen Victoria came to the throne. In fact, several of his works are set in the Georgian period (The Pickwick Papers 1827-8, Little Dorrit around 1826, Barnaby Rudge 1780).

Many of his works were originally published as multi-part serials, complete with cliffhangers. A typical 'Dickensian' scenario features hordes of memorable — and often catchphrase-spouting — characters tumbling through ever-more-outrageously contrived plots. They would be delivered to the subscribing public in small bound monthly installments of three or four chapters at a time (rather like the modern comic-book industry) over the course of two or three years. Nowadays, the installments generally mark chapter breaks in the larger novel.

This set-up resulted in the books serving as the soap operas of their day, and the subsequent need to keep reader interest alive accounts for the convoluted nature of much of Dickens's plotting. The more readers, the more subscription fees; a very direct connection to the fanbase, so to speak. If sales dropped over the latest plot twist, Dickens would sometimes be forced to undo months of careful pre-planning.

Thus it's perhaps not altogether surprising that his writing style can be best described as "barely controlled chaos." It mirrored the society he lived and wrote in — sentimental and satirical, melodramatic and priggish, exuberantly credulous and narrowly sceptical. And as if to match the action, the style of diction is wordy in the extreme — popular legend holds that he was "paid by the word." These novels are stuffed full of literary flourishes that are not criticized today only because their author was an undisputed genius. Also, this was before the realism movement in literature

which scorned extensive background information and description of characters and places, let alone any form of Anvilicious moralising. As in a modern Soap Opera, there are usually about four or five interwoven plots on the go in any single Dickens novel, not counting many more side-issues and random authorial digressions. The whole was often leavened substantially with social criticism, most famously in Oliver Twist, Nicholas Nickleby, and Little Dorrit.

Tropes he rather heavily relied on to get these effects included hidden connections between established characters and the Contrived Coincidence. A number of the crucial plot twists in David Copperfield, for instance, depend on characters just happening to walk past doors or meet on the street (in the heart of London!); A Tale of Two Cities only happens to begin with thanks to the intersection of a fortuitous marriage, a highly coincidental co-passage on a boat, and an Identical Stranger.

Towards the end of his career his stories took a noticeably darker and more didactic turn, as his interest in social issues consumed him more and more, and his despair in the face of their effects mounted accordingly. It's usually best, when starting a course of Dickens, to work your way through the canon from earlier to later books. Much of this may have largely been attributed, according to his son, from a near-death experience in the Staplehurst Railway Accident

, in which he and his mistress were passengers on a train that derailed in 1865 due to a misread schedule during maintenance on a viaduct. Though he survived (albeit where he refused to acknowledge his presence to avoid alerting the public to his infidelity), he was shaken by the experience, and was apparently nervous riding trains from that point forward. Such an experience is suspected to have led him to write the short story The Signal-Man just a year later (though it was closer to a collision that occurred at Clayton Tunnel in 1861).

He died of a stroke in 1870, coincidentally five years to the date after the fateful train crash, leaving his last novel, The Mystery of Edwin Drood, unfinished. His direct descendant Harry Lloyd is now an actor, whose work includes an adaptation of Dickens' Bleak House, a role in the first half of an adaptation of David Copperfield, and a turn as Viserys Targaryen on Game of Thrones.

Dickens also wrote a good deal of non-fiction, such as:

The works of Charles Dickens provide examples of: