Literature / The Battle of Life 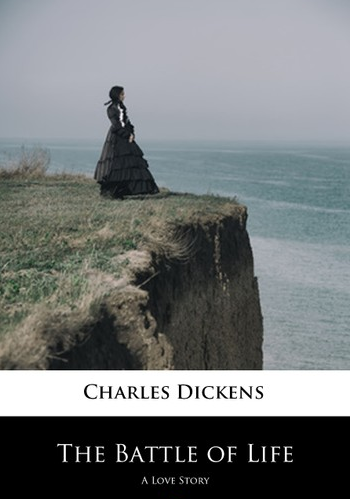 The Battle of Life is a novella by Charles Dickens first published in 1846. It is considered one of his "Christmas books" even though its connection to the holiday can be considered rather minimal.

A doctor named Jeddler lives in a small village with his two daughters; the elder Grace and younger Marion. They also have a ward named Alfred Heathfield who is about to travel away to continue his schooling. Dr Jeddler has a special morning meal prepared as well as calling his attorneys to prepare the official transfer of his bond before he sets off. According to everyone involved Marion and Alfred are betrothed to one another although Marion seems to be acting a bit mum on the subject. Before Alfred leaves he asks Grace to protect Marion until he can return to be properly wed which Grace agrees. As Alfred leaves Marion cries into her sister's shoulder.

Some time later, the same attorneys (Snitchey and Craggs) are trying to handle a client who is in serious financial trouble. This libertine named Michael Warden really needs to exit the area to nurse his financial well-being back together but he tells them before he does he thinks he has a chance to win the hand of Marion Jeddler as he had been taken to the house and met her after a horse riding accident. When news reaches Jeddler's house Alfred will be arriving home everyone gets excited to welcome him. However just as he arrives at the house, everyone comes rushing out to tell him Marion has run away.

There is another Time Skip to six years after the event where we learn the Alfred had married Grace and it turns out that is exactly what Marion wanted. So we get to slowly reveal who knew what and when (and given this is Dickens you'd better just read the whole thing instead of needing any more summary here)