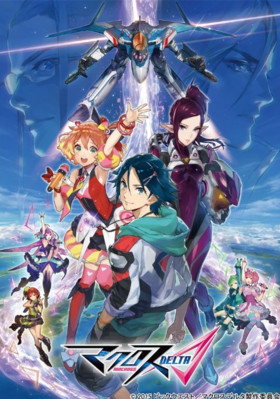 "I can fly if I ride the wind. If I risk my life, I can fly."
Advertisement:

Macross Delta is a Spring 2016 Anime and the fourth full series in the popular Macross franchise. The show is produced by Shoji Kawamori and Satelight.

The year is 2067 - over half a century since the first Space War left Earth decimated, forcing humanity to venture into the stars to escape extinction (and eight years since that mess with the Vajra). While mankind has found homes on many planets and mingled with several alien races, one remote part of their civilization, the Brisingr Globular Cluster, is beset by a new crisis - Var Syndrome, a disease where abnormal fold waves induce uncontrollable aggression in victims. Combatting this threat is the Idol Singer group Walkure, who uses song to neutralize the dangerous fold waves, and their escort combat unit, Delta Squadron.

The show follows three characters: Hayate Immelman, a Brilliant, but Lazy teen Desperately Looking for a Purpose in Life who is scouted for Delta Squadron; Freyja Wion, a young girl who ran away from an Arranged Marriage on her home planet of Windermere to join Walkure; and Mirage Jenius, a female member of Delta Squadron who becomes Hayate's instructor and Freyja's roommate.

Before long, the three become involved in an inter-planetary war between the colonies of mankind and Freyja's homeworld of Windermere, who are exploiting Var syndrome to form their own pan-galactic "Kingdom of the Wind."

The series obtained a 2018 movie adaptation entitled Macross Delta the Movie: Passionate Walkūre which is a compilation of the TV series with Walkūre as the primary focus and some plot changes. In September 2018, there was announcement of a new movie which new content, as opposed to the previous movie. Titled Macross Delta the Movie: Absolute Live!!!!!!, it has a sixth performer and a new threat faced by Walkūre and the Delta Squadron. Originally announced for a 2020 release, it was later moved to October 8, 2021.

A tie-in game known as Macross Delta Scramble was released on the Playstation Vita in Japan by Bandai Namco Entertainment on October 20, 2016.

There's a manga prequel called Macross Delta Gaiden: Macross E where it explored the initial days where Chaos was considering the use of an underground pop group known as the Thrones to combat the Vár Syndrome in Pipré. This leads to the formation of Chaos' Tactical Sound Unit.