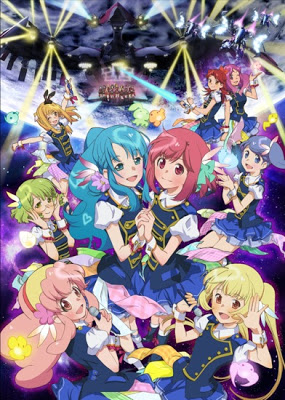 It's AKB48 IN SPAAAAAACE!
"In a future where humankind has moved into space... the tears we shed become stars.
AKB0048. We will fly through space to see you."
Advertisement:

AKB0048 is a 2012 Japanese anime television series based on the popular AKB48 idol group. The anime is produced by Satelight, with Shoji Kawamori as chief director and writer. The first season began airing on April 29, 2012 and ended on July 22, 2012. The second season started airing January 5, 2013 and ended on March 30, 2013. The series draws upon the real-life AKB48's repertoire for its soundtrack, with composer Slavek Kowalewski arranging some of it and contributing some original works for the series' incidental music.

At the start of the 21st century, an interplanetary war broke out. Earth's ecosystem was destroyed, and humanity was forced to flee the planet. In this new society, things that "disturb the heart" like music and art are forbidden. 48 years later, a legendary idol group is resurrected as AKB0048. Labeled as terrorists, they must take up arms to defend their careers and their fans.

Young Nagisa Motomiya, Yuka Ichijo and Orine Aida had lived their whole lives on Lancastar, a planet fully under the Entertainment Ban. Their lives changed completely one day when their new friend Chieri Sono took them to a guerrilla concert held in defiance of the ban by AKB0048. Inspired by the singers' radiance, the four girls vow to become members of 00 themselves. Four years later, they leave home to take part in the AKB0048 auditions. Once they get there however, they find that AKB0048 isn't all about singing and dancing and looking pretty. Dangerous and possibly fatal endeavors are involved when going up against the Entertainment Ban and its Destroy Entertainment Soldiers (DES). And within the group, there is more going on behind the scenes than even the members realize.

To the surprise of many, an English dub premiered at the Los Angeles Convention Center in July of 2013, with the release of the first season coming that autumn.

Also has two manga adaptations: AKB0048 EPISODE 0, a prequel that tells the story of Atsuko Maeda the 12th and serialized in Nakayoshi; and AKB0048 Heart-Gata Operation, which follows Kanata, Acchan the 13th, Yuko the 9th, and Kojiharu the 8th in a mission to protect the group from the thief Elixir's menace, serialized in Bessatsu Friend.