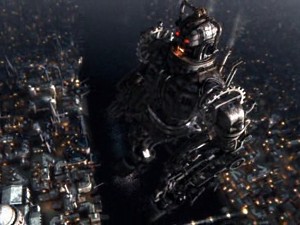 Well, for once it's not Tokyo getting rampaged.
"There are always giant robots. Always."
— Cliché #54, The Grand List of Console Role Playing Game Clichés
Advertisement:

Simply put, this is when a work is not about Mecha, but throws one or more in at some point(s) anyway. Why? Because giant robots are cool, duh!

Note that perhaps no work absolutely needs mecha, but some works still center around them, especially a Super Robot show. This is when you can throw out the mecha and still have most of the work intact. But it wouldn't be as awesome, right?

Other popular condiments for when authors feel a science fiction or adventure plot is in need of fresh flavor are giant monsters, zombies and ninja.

How do you make Final Fantasy better? With a lore-friendly mobile suit!

How do you make Final Fantasy better? With a lore-friendly mobile suit!