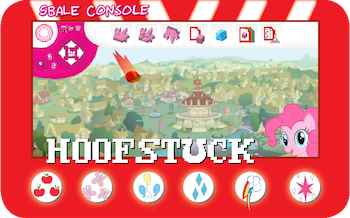 Pinkie Pie has invented a new game that can alter the fabric of reality and threatens to destroy all of Equestria. Does nopony but Twilight think this is a bad idea?
— MS Paint Fan Adventures description
Advertisement:

is a crossover Fan Webcomic between My Little Pony: Friendship Is Magic and Homestuck that was driven by reader suggestions. The first forum thread is here

Pinkie Pie has come up with some new gadgets for playing a mysterious and dangerous game called SBALE. A whole lot of horsing around ensues, with the story jumping around to follow various characters scattered across town and beyond, in the past, present and future.

The story is set in a version of the Friendship Is Magic universe that includes some of Homestuck's in-universe game mechanics, such as fetch modi. It is written with the intention that being familiar with Homestuck is not required to follow along. It does, however, contain many references to its source materials and their predecessors, as well as the Friendship Is Magic fandom.

The comic ran from November 2011 to May 2013 before going on hiatus. The next year, it was declared cancelled due to its projected size, with the author summarizing the remainder of the story in a forum post

and on the last page

of the comic itself. note The summary is about 10,000 words, just to give you an idea.