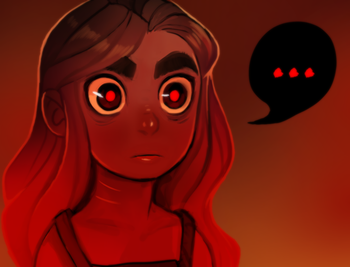 A character, for whatever reason, doesn't speak. However, it's a matter of importance to emphasize that they aren't speaking. How do you show it?

Simple: use an ellipsis. This is better known as "…", and is usually used to represent either where part of a paragraph/sentence was removed or a break in the thought. Thus, when a character is either mute or choosing not to speak, their dialogue box/speech bubble/subtitle becomes an ellipsis to show that is the case. Sometimes appears as an exclamation mark or question mark, which also imply the silence while carrying a message of their own (and usually with a situation-appropriate shift in facial expression). Often used for a Beat Panel or when a character has nothing to say.

Occasionally this shows up for added emphasis in animation as a form of Painting the Medium.

Compare Dramatic Ellipsis, Melodramatic Pause, and Sweat Drop. A Silent Protagonist may sometimes speak only in this, and such a character may or may not be The Unintelligible. Compare also Chirping Crickets, if the whole cast of characters is too stunned or embarrassed to speak. Turns up in comics as the word *crickets* in place of a speech bubble.