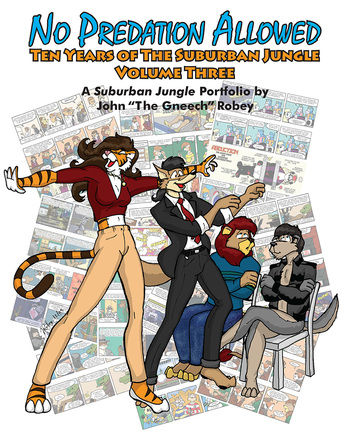 "Are you crazy? Is that your problem?"
Advertisement:

The Suburban Jungle is a long-running furry slice-of-life webcomic by John 'The Gneech' Robey, centring around the life and career of Tiffany Tiger. Ended (rather than simply being abandoned) mid 2009.

When the story opens Tiff is an aspiring model who works crummy temp jobs to pay the rent. More recently she has found acting success in Kitten Kaboodle: Space Ranger and a role in upcoming film A Girl And Her Dog.

Early episodes involved Tiffany, her panda roommate Yin, Wensley the mouse and his brother Ramses (the angriest mouse in the world) and Leonard Lion, owner of a popular bar called "The Watering Hole". Later on the cast expanded, with several one-shot characters sticking around for the ride and other regulars including Tiffany's mother and siblings.

Some of the cast:

You find it at http://www.suburbanjungleclassic.com

The Suburban Jungle provides examples of:

Rough Housing has examples of: