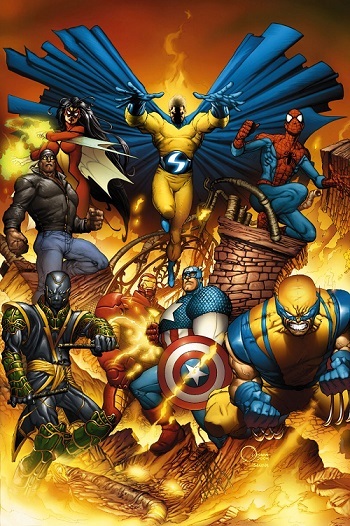 After Avengers Disassembled, Tony Stark disbanded the Avengers. Six months later, a prison riot at the Raft proved that the world needed an Avengers team, so Captain America recruited the other heroes who helped stop the riot - Iron Man, Spider-Man, Luke Cage, and Spider-Woman - to form the New Avengers. As the first few arcs went on, the team was joined by Wolverine, The Sentry and Ronin (a disguised Echo, sent by Daredevil in his place, later replaced by a resurrected Hawkeye). Following Civil War through to the end of Dark Reign, the team was forced underground, but with the beginning of the Heroic Age they were free to operate openly. The series lasted for 64 issues (January, 2005-June, 2010).

Following Dark Reign, the team was officially sanctioned by S.H.I.E.L.D., and was one of two public teams of Avengers active in the Marvel Universe. They were led by Luke Cage and based in Avengers Mansion.

In other media, the team (consisting of Spider-Man, Luke Cage, War Machine, Iron Fist, Wolverine, and the Thing) appeared in a self-titled episode of The Avengers: Earth's Mightiest Heroes!. Most of the members also are playable heroes in the Facebook game Marvel: Avengers Alliance. Also, in the Marvel Cinematic Universe, the New Avengers are referenced at the end of Avengers: Age of Ultronnote The immediate follow-up, Captain America: Civil War, doesn't pick up on this in which, with Thor leaving for Asgard, the Hulk for parts unknown, and Iron Man and Hawkeye leaving the team, Cap and Black Widow decide to rebrand the team with War Machine, The Falcon, Scarlet Witch and The Vision as its new formation.

Not to be confused with the British TV show The New Avengers, which was a revival of The Avengers.

open/close all folders
Volume I Tropes
when Sentry shows up and makes short work of Carnage, flying him off into space and tearing the symbiote into pieces. Carnage and Cletus were even assumed to be dead for a while.
Volume II Tropes