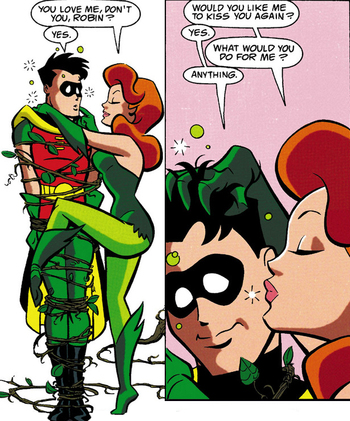 Lady Sif: Lorelei bends and shapes the will of men to her own purpose.
May: Only men? Her powers don’t work on women?
Sif: No. Men have an inherent weakness we do not share… The mere sound of her voice can ensnare most. For the rare man who can resist, it’s her voice joined by her touch that will overpower his will.
— Agents of S.H.I.E.L.D., "Yes Men"
Advertisement:

You're in a Science Fiction and/or military universe. An extraordinarily hot chick shows up. Your base is now in complete disarray because everybody is suddenly trying to do the horizontal lambada.

This sudden rush of hormones and pheromones is generally due to the fact that The Vamp is the episode's Monster of the Week and is using the good guys' sex drives to distract them from her dastardly plan. She usually does this in secret, but if her pheromones are strong enough, the heroes can know exactly what's going on and not care.

Sometimes, Vampires Are Sex Gods is a supernatural effect and used to lure Muggles to the dinner table. Succubi and Incubi are also fond of just straight-up enchanting their victims supernaturally before sucking out their soul. Oftentimes this is a tool in a Literal Maneater's arsenal so that she can more easily seduce a man and eat him alive.

This trope is when Love Is in the Air is caused by the presence of an alien or fantastic creature, and works like a more passive version of Aliens Made Them Do It. It's generally a first-season ploy by sci-fi shows to get ratings through Fanservice. For the single-target version, see Pornomancer. Also Not Right in the Bed. May lead to Happiness in Mind Control.

Interestingly, most characters with this power will not use it to actually have sex with their victims, preferring instead to just use it as a tool of manipulation ("If you truly love me, bring me Captain Hero's head on a platter, sweetie"). It's not always clear whether this is due to the villain having a tiny shred of morality or censors not wanting the story to go there, but any villain that does use this power to take sexual advantage of others would be a rapist and considered particularly vile.

Examples of this trope only targeting cis-straight people of the opposite sex can lead to Fridge Logic over whether or not someone with these powers could affect gay, bisexual, asexual, or transgender individuals. Would a queer woman be just as susceptible to Poison Ivy as a man? Could a gay or asexual man laugh off her pheromones and knock her flat? Etc. This is more likely to be addressed in stories from the 2000's and later.