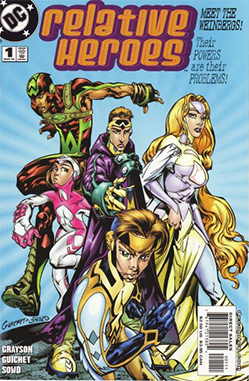 Relative Heroes is a six issue limited Comic Book DC Comics series published in 2000. It was written by Devon Grayson, with artwork by Yvel Guichet, Aaron Sowd and Mark Propst.

Relative Heroes follows the newly orphaned Weinberg children, Joel, Cameron, Tyson and Aviva, and Aviva's babysitter Damara Sinclair as they travel across the country from Berkley to Metropolis in their parent's Winnebago to ask if Superman can somehow save their parents. The Weinbergs are chased by Social Services and, to their surprise, the D.E.O., various law enforcement agencies and a member of the Greek pantheon. They quickly learn that Damara had more compelling reasons to run away from home than wanting to support their efforts to revive their parents, and that their adoptive brother Cameron has a more complicated past than any of them would have guessed.

For their character sheet check the Young Justice Characters Sheet under Allies.