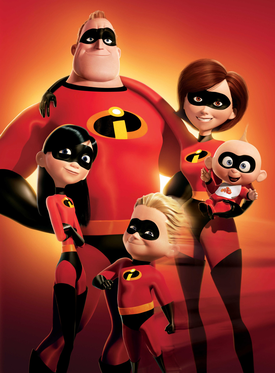 Who says family time can't be super?
"The Incredibles is not just a superhero movie—it is a movie about a family that just happen to be superheroes."
— Brad Bird
Advertisement:

Many Super Teams are made up of unrelated individuals who chose to answer The Call, others at least share a Mass Super-Empowering Event or some form of You All Share My Story. Then there's super teams that arise from, or create their own, Super Family Team. These heroes or villains may have a familial relationship before they gain their powers and choose to stay together because they know and trust each other. On the other hand, a team of unrelated supers may become a super family around a core couple (usually The Hero and The Chick) while the rest become True Companions and family by extension. This second one is especially common for the Secret Project Refugee Family or social outcasts made up of unrelated experimental subjects.

It's not uncommon for both versions of this trope to coincide when new supers (or even Muggles) marry into the family or get "adopted". Sometimes the children are raised without knowing their parent's real day job, and receive their Secret Legacy. Other times the kids grow up amidst alien invasions and time travel shenanigans. Though most Super Family Teams are comprised of a Nuclear Family structure (not necessarily with atomic powers, mind), they may substitute an actual mother or father with a Promotion to Parent, Mama Bear and/or A Father to His Men, or go without and simply have a "big bro/sis" as team leader.

This trope is morality neutral, it's just as easy to have a family of crime as it is to have a family of crime fighters. The Super Family Team is likely to use a whole lot of the Family Tropes, and range from being a happy family with occasional scrapes to a Big, Screwed-Up Family that is a snide remark away from family-cide. Evil Super Family Teams tend to have a much more dysfunctional dynamic than that presented in good super family teams. It's not surprising to see evil families fall apart or fail at their missions. That said, it's not impossible for an evil family to actually have better intra-familial relationships than their good counterparts. Still, the general norm is that a good family of supers will have a better chance of success and life expectancy (both as teams and as people) because happy families get along] and stick together.

To keep this trope from being a recounting of "these two supers had a kid with powers", at least two relations have to fight crime, explore Alternate Universes or some other team-based activity.

Usually overlaps with The Fantastic Faux.