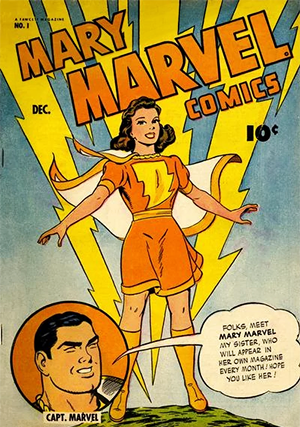 Mary Marvel, otherwise known as Mary Batson or Bromfield, is the sister of Billy Batson, aka Captain Marvel/Shazam and has similar powers through the same means. Mary was one of the earliest female superheroes in comics, appearing for the first time in 1942. She was purchased along with many other Fawcett characters by DC Comics in 1972.
Advertisement:

Mary was originally Billy's long lost twin sister whose adoptive family, the Bromfields, took in Billy who had been living on the streets. Their blood connection is not always maintained in adaptations though their foster sibling status is consistent. She originally had her powers derived from a different set of individuals than those that bestowed power on her brother but the first letters of their names still spelt out the magic word SHAZAM: Selena, Hippolyta, Ariadne, Zephyrus, Aurora and Minerva. This was later changed to her powers being derived through the same source as Billy and shared between them and Freddy Freeman/Captain Marvel Jr.

Mary appears in the 2019 film SHAZAM!, portrayed by Grace Fulton and Michelle Borth in her respective normal and superhero forms. Much like in the Geoff Johns run, she is portrayed here as Billy Batson's foster sister, instead of a biological sister.