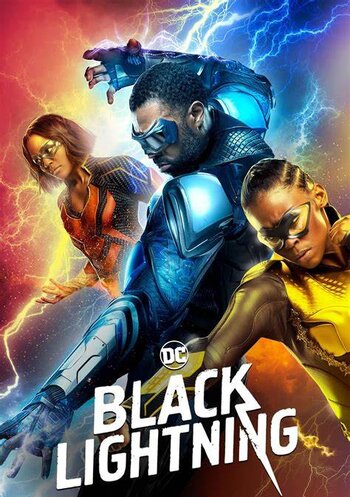 "Justice, like lightning, should ever appear, to some men hope, and to other men fear. My father taught me that poem when I was just a little girl. I didn't fully understand the poem, until I grew to know the truth about my family and myself."
— Jennifer Pierce
Advertisement:

Black Lightning was a superhero television series aired by The CW, based upon the DC Comics character of the same name, which premiered on January 16, 2018.

Jefferson Pierce (Cress Williams) was once Black Lightning, the only hero his community had to protect them from a criminal gang known as the 100. At the behest of his wife Lynn (Christine Adams), he dropped his vigilante career to become a high school principal and raise his daughters Anissa (Nafessa Williams) and Jennifer (China Anne McClain) without being at risk in battle.

However, the 100 didn't go away like he did and have become an even greater danger to the city, the school, and Pierce's family, and Jefferson must return to the life of a superhero if he is to protect all that he cares for. Also, having been kept in the dark over their father's past, his daughters are confused when each starts to exhibit powers of their own...

Though originally not set in the Arrowverse, Jefferson eventually appeared in the Crisis on Infinite Earths crossover event, while the Black Lightning series itself aired a tie-in episode around the same time. Alongside Supergirl's Earth-38, Black Lighting was then folded into the Arrowverse's new, unified Earth-Prime note  the universe it was set in previously was dubbed "Earth-BL" by the Arrowverse Wiki, but it didn't have an official designation on-screen as a result of the storyline's events, with Jefferson becoming a founding member of the Arrowverse's Justice League.

The fourth season, which premiered on February 8, 2021 was announced to the be the last season

. A spinoff featuring supporting character Painkiller (portrayed by Jordan Calloway) was reported as being in development in November 2020

, with a backdoor pilot airing during the final season. On May 24, 2021, the same day that the series finale aired, it was confirmed that the spin-off was not picked up

The series was developed by Salim Akil, who executive produced it with his wife, Mara Brock Akil, and Arrowverse creator Greg Berlanti. As with many CW series, it was streamed as a Netflix Original in certain countries, which did cause some continuity lockout issues as a result of the aforementioned Crisis.

"This was the night, in the rain, with Thunder and Lightning as witness, that Black Lightning was born again."
Feedback