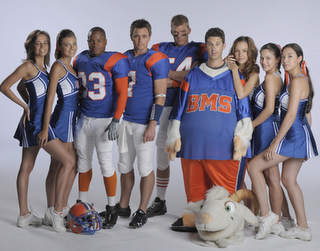 Gimme a hell... gimme a yeah! Stand up right now!
Spike TV once decided to bring its viewers a smart, social drama focusing on young men and their lives, loves and losses in the hallowed halls of their first university... Yeah, it wasn't possible to read that with a straight face.
Advertisement:

Blue Mountain State premiered in January of 2010, and was created and executive produced by the makers of The Sarah Silverman Program and It's Always Sunny in Philadelphia. It focuses on three freshmen from three very different backgrounds who find a common bond in having to deal with the Wacky Fratboy Hijinx of BMS: Alex Moran (played by Darin Brooks) is a second-string QB who enjoys all of the perks of being on the football team with less pain and suffering, Craig Shilo (Sam Jones III) is a phenomenal RB with an overcontrolling girlfriend who hopes to ride him to wealth and fame and Sammy Cacciatore (Chris Romano, a.k.a. "Romanski") is Alex's roommate who cons his way into the team's mascot position in hopes of scoring with the cheerleaders.

Together, they find themselves enjoying the constant boozing, partying and sexing while dealing with other staples of college life. Staples like a transgender prostitute, a pocket pussy, drugs, strip clubs, studying for midterms and more. If you're looking for a big-honkin' caricature of college life, this might be the show.

Season Two introduces some more named characters into the cast, like Radon Randell, the freshman QB from Detroit who admits he used to be in prison and quickly becomes the Goats' new starter, and MaryJo, Sammy's promiscuous sister who joins the BMS cheerleading squad in hopes of someday banging Alex.

In 2012, the show was not renewed for a fourth season. However, in 2014, the show's cast and creative team started a Kickstarter fund in order to make a movie to serve as the Grand Finale, which was released on Netflix on February 2, 2016.