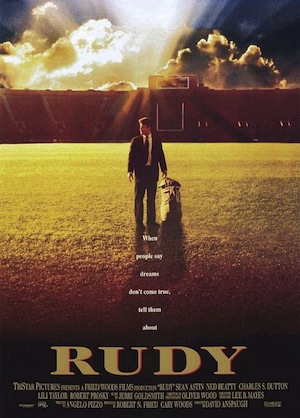 A 1993 Sports Film Based on a True Story. Sean Astin plays the title character Daniel "Rudy" Ruettiger, a kid with little academic credentials or athletic prowess. He wants to go to The University of Notre Dame but has next to no chance of getting there. When a close friend dies in an accident (the only one who didn't criticize his dream), he decides that he is going to play for the Fighting Irish, no matter the obstacles. The only thing Rudy can offer anyone is his exemplary effort, which is his most valuable asset for the few people who recognize it.