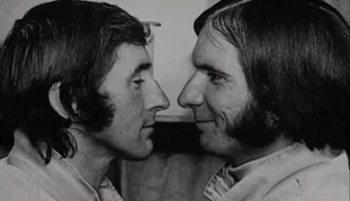 Jackie Stewart and Emerson Fittipaldi.
"You got the part! Don't cut your hair!"
— Judd Apatow to the male cast of Freaks and Geeks
Advertisement:

Is it the sideburns? Is it the general shape, in which we, in hindsight, can recognize what would later become the mullet? In any case, the audience recognizes the era as soon as a manly mane of this sort is shown.

Yeah, it's the sideburns. They were undoubtedly the defining feature of Seventies male hair, in addition to hair that was worn naturally thick—straight at first, and "hippie-ish" just like '60s Hair during the first half of the decade (since the early seventies was really The '60s Part II) but increasingly frizzy during the second half (a preview of '80s Hair) as the decade wore on, perhaps thanks to the influence of glitter rock, or possibly the Black Power movement. The other "very 70s" hairstyle is the Afro, immensely popular in the 70s (though it started in the late Sixties) for most African-Americans, but even white guys with curly hair tried to have one. Afros in fiction often tend to be exaggerated for comic effect. Other "very 70s" hairstyles are mohawks and spiked hair.

Women's hair was also "hippie-ish" (long and straight) for the first half of the decade and puffy and combed-over during the second half (also a preview of '80s Hair). Outside of this wiki, when referring to "70s hair", people usually mean that sexy feathered hairstyle associated with Farrah Fawcett, Kristy McNichol, and Stevie Nicks. Usually when referring to what's called '70s hair on this wiki, terms like "Disco hair" are used.

The Let It Be Look

The seventies was both the "wild" and "let it be" looks.

The Let It Be Look

The seventies was both the "wild" and "let it be" looks.