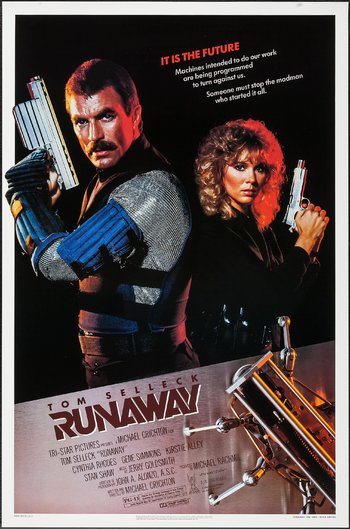 20 Minutes into the Future, robots are as much a part of everyday life as any other electrical appliance—and are just as prone to malfunctions. But when a robot malfunctions, it can pose a threat to people or property. Such robots are colloquially known as "Runaways". As runaway robots can be somewhat more dangerous than a broken printer, they are not handled by company tech support personnel but by the Runaway division of metropolitan police departments.

Sgt. Jack Ramsay (Selleck), an experienced member of the Runaway squad, is breaking in a new partner; officer Karen Thompson (Cynthia Rhodes). Though she is enthusiastic, Ramsay assures her that there is little excitement involved, saying that all he usually has to do is flip a switch; most people know less about their robots than they do their desktop computers, and rarely take any better care of them than they do their cars. Basically, she's signed up to chase broken machines while lazy mouth-breathers laugh at her.

...And less than twenty-four hours later, Ramsay and Thompson find themselves The Only Ones capable of facing a completely unforeseen threat; the first robot-facilitated homicides.

The brilliant and amoral Dr. Charles Luther (Simmons) has made the breakthrough to turn household appliances into killing machines, and it's up to a couple of desk jockeys to engage the evil genius in a cat-and-mouse game of acid-spitting robotic spider assassins, smart bullets, and freeway-running guided bombs.

Luther thinks he's unstoppable, but Ramsay is a determined cop who knows what every IT professional knows: any system can fail.