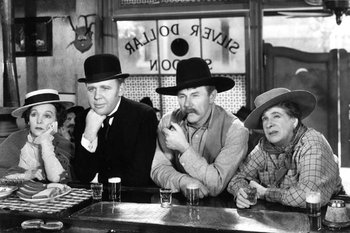 Ruggles of Red Gap is a 1935 comedy film directed by Leo McCarey and starring Charles Laughton. It was adapted from a best-selling 1915 novel of the same name by Harry Leon Wilson.

Ruggles (Laughton) is the prim, proper valet to the Earl of Burnstead (Roland Young). One night in Paris the Earl fares badly at cards, and loses Ruggles to an American tourist, Egbert Floud (played, coincidentally enough, by Charlie Ruggles). The very English Ruggles is uncomfortable in the company of the loud, brash Egbert, and doesn't like his snooty, socially ambitious wife Effie (Mary Boland) much better, but because the plot demands it, Ruggles agrees to accompany them back to their hometown of Red Gap, Washington. Ruggles is initially uncomfortable in America, but he makes new friends and finds romance with Mrs. Judson (ZaSu Pitts), a local widow. However, Effie's sister (Leota Lorraine) and her husband Charles Belknap-Jackson (Lucien Littlefield) take a dislike to Ruggles, seeing him as a threat to their social pre-eminence in Red Gap, and then there's the matter of the Earl, who wants Ruggles back as his valet.