Film / Rookie of the Year 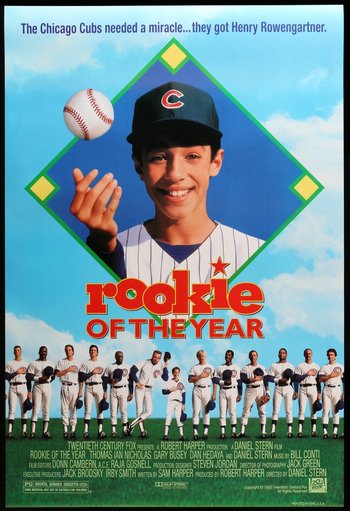 The Chicago Cubs needed a miracle... they got Henry Rowengartner.
Advertisement:

12-year-old Henry Rowengartner is a Little Leaguer who is a little...inept at playing (as in, he inadvertently throws a fielded ball over the outfield fence instead of to the infield). When he breaks his arm trying to catch a fly ball, it seems like another downer for the kid - until he discovers that the tendons in his arm have healed a little too tight, giving him the ability to throw the ball with amazing force.

After a startling demonstration of this newfound ability at Wrigley Field, he is signed on as a pitcher for the Chicago Cubs, where he learns that being a professional baseball player is a lot harder than it looks. Needless to say, Hilarity Ensues.

One of two big semi-family-oriented baseball movies in 1993. The other was The Sandlot.