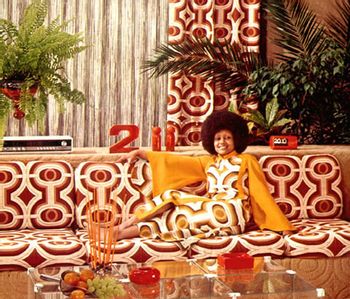 Ah, the Seesaw Seventies/Sordid Seventies: A time when love was free, peace was the sign of the times, people were shouting "me, me, me" through self-esteem, self-discovery and individual identity, and polyester was the fabric of choice. A period in history where the men wear polyester leisure suits with flaring trouser cuffs and huge ties while sporting heavily sprayed and styled hair, sideburns included. Not to be outdone, the women wore feathered, Farrah Fawcett hair above their slinky dresses with no bras underneath. Black people sported a huge, poofy Funny Afro as a Take That! to past straightening practices. Heck, even white people had afros if they could grow them! Most people spent at least 92 percent of their waking lives at the disco

or behind the wheel of a car

Elsewhere, Western Terrorists (and the Arab ones) are trying to blow up people, the United States is still losing in The Vietnam War, and the Summer Blockbuster is invented twice (Jaws and Star Wars). Media Technology reaches a turning point, as 8-track audio cassettes and the first versions of the VCR (U-matic in 1971, Betamax in 1975 and VHS in 1976) appear, as does the original LaserDisc (1978), the very first optical disc storage medium, and the very same technology that would later make CD, DVD, and Blu-Ray possible. However, despite the new media technology, the old media technologies, namely the LP and film stock, are both still king as they had been for most of the 20th century. Movies such as Taxi Driver and The Godfather begin to deal with subjects once considered taboo due to the repealing of The Hays Code at the tail end of the preceding decade, and pornographic film becomes legal in the States. The world learns the meaning of Kung Fu thanks to a tough little guy from Hong Kong named Bruce Lee, while Evel Knievel Ramp Jumped everything from cars and trucks to double-decker buses and river canyons.

The first hints of a digital revolution touching mass markets appear during the mid-70's, with the introduction of inexpensive microprocessors. video games, personal computers, digital wristwatches and pocket calculators are commercialized by a host of companies old and new. Incumbents in amusement arcades, companies like Williams and Gottlieb rush to update their pinballs and other electromechanical games to incorporate the new solid state technologies. By the end of the decade numerous categories of machines are reinvented with electronics, changed from gears and chimes and clicking wheels to beeps and buzzes and digital readouts or video displays. "Memory storage" is a hot feature of many electronics. Larger computers, meanwhile, are a hot topic for researchers in all fields - the possibility of harnessing more data processing power is irresistible, and the decade proves to be a twilight for groundbreaking computer science, as later decades focus mostly on commercialization and diffusion of pre-1980 research.

The late 70's are a good time to be a nerd if you're handy with a soldering iron, and if you aren't, you might be playing Dungeons and Dragons or reading Heavy Metal Magazine or The Silmarillion - it's a vibrant time for a whole cross-section of fandoms. Alternately, you might instead be interested in health and fitness. The idea of "jogging" for one's health is still relatively novel and unusual in this decade, but Vic Tanny "fitness clubs" had already been around for several decades, promoting the idea of "toning and strengthening" with machines. Bodybuilders like Arnold Schwarzenegger and Lou Ferrigno became more represented in the media through film and television roles, although leading men in action films were typically along the lines of Charles Bronson.

Television is changed forever by such ground-breaking shows as All in the Family, M*A*S*H, The Mary Tyler Moore Show, Saturday Night Live and Monty Python's Flying Circus. Meanwhile gentle family shows like The Waltons, Little House on the Prairie and The Life and Times of Grizzly Adams found their own audience while The Fonz was ruling the kids' imagination while giving Robin Williams his big time start as the master comedian in Mork & Mindy, and Star Trek: The Original Series is Vindicated by Cable and develops a sizable fanbase, spawning a juggernaut franchise that would not die for... well, ever. While the kids have made the best of The Dark Age of Animation with Saturday Morning Cartoons like Superfriends and Scooby-Doo, they at least had PBS's breakthrough kids shows, Mister Rogers' Neighborhood and Sesame Street in their vibrant glory of its youth before they graduated to The Electric Company (1971), Zoom and Big Blue Marble. Traditional TV genres like the variety show had their last hurrah like Sonny And Cher and Donny and Marie while The Muppet Show became a universally hailed worldwide success. Game Shows become huge once again (after the 50s quiz show scandals nearly became a Genre-Killer), with shows like The Price Is Right, Match Game, Family Feud and The Hollywood Squares becoming huge amongst people from all walks of life, with many others becoming either fondly remembered, or (due to tape erasure or Executive Meddling, typically) cult classics amongst game-show fanatics.

The Bronze Age of Comic Books begins, featuring death, politics, and "ethnic" superheroes for the first time ever since The Comics Code crippled the medium in the 1950s. That happened when Stan Lee wrote a government-requested anti-drug Spider-Man story, which the code was dumb enough to refuse to authorize because it portrayed drugs, forcing Lee to diplomatically defy them to considerable praise.

Punk Rock and Disco, two genres of music which continue to influence music to this day, come out during this decade, as does the first primitive Electronic Music under such bands as the German Kraftwerk, Yellow Magic Orchestra from Japan and Suicide from New York City. The break-up of The Beatles however was the defining moment of the music era, as it created a power vacuum for any aspiring musician to make it big. Nonetheless, the early years of the decade are considered to be the zenith of Hard Rock (and rock music, in general), as easy listening was off the charts and modern pop music wouldn't drive rock from the top 40 until 1976. Alternative Rock, Heavy Metal and Rap Music took their first steps here too.

While this began late in The '60s, the '70s really solidified the changes that would shape the world to this day. The Cold War slowed down as American and Soviet relations improved for the first time since 1945. American distrust for authority, while brewing during the war, began to really take form in the wake of the Watergate scandal. Crime and grime were on the rise and respect for law and order — from both criminals and their victims — began to decline in favor of the good old-fashioned "heads blown off" method. Furthermore, liberals and conservatives ended up at each other's throats more violently than ever before in the wake of events like Vietnam and Watergate, with western society becoming socially and politically polarized to a level never again reached until the emergence of the Tea Party in 2009 and (more notably) the political rise of Donald Trump in the mid-2010s.

The botched Apollo 13 mission (1970) (although the feat of getting the astronauts home alive was hailed as an achievement for NASA), the Munich Olympics massacre (1972), the Oil Crisis of 1973 and the American defeat in Vietnam (ended in 1975) broke forever the sense of security and confidence Westerners had had from 1946, although it arguably really began to crumble with the assassinations of John F. Kennedy (in 1963), Martin Luther King Jr. and Robert F. Kennedy (both in 1968). Munich was notorious for introducing mass awareness of terrorism (soon thereafter the IRA would begin its bombing campaign in the UK) and the fallibility of basic security, and it was just the beginning. The energy crisis had Westerners running out of gasoline for the first time, showing the world just how dependent we all are on the Middle East, thus the post-war economic boom that dominated The '50s and The '60s ended in a recession, turning the American manufacturing Belt into the "Rust Belt". The welfare state-based economy that begun with the New Deal lost support and was replaced by the next decade with the laissez-faire "New Economy", heavily dependent on the banking industry, with its effects of mass speculation making finances more exciting — and riskier.

The environmental movement gained rapid speed as a result of the fuel shortages. In 1970, the first Earth Day was held, and in 1971, Greenpeace was founded. Many people worried that the world was on the edge of an environmental catastrophe. Among other things, people went informal with ties and suits being thrown away (except for going to work: "Casual Fridays" began in The Nineties) and fashion rules being eliminated, stating that "there are no rules in fashion"; the animal rights movement also had its origins during this period. Political correctness is born along with Moral Guardians raising their voice; single parenthood transitions from taboo to become (sort of) commonplace while gay rights gain steam; women become an important part of the workplace; divorces quickly begin to outgrow marriages (although to be fair, many had married under the "sexual revolution" of the 60s, especially the young) and couples begin to live together without marrying at all.

Covers roughly the period from the Kent State Massacre on May 4, 1970 to both the Presidential inauguration of Ronald Reagan and the end of the Iranian hostage crisis

20 minutes later on January 20, 1981 politically (replace with Margaret Thatcher if you're British). Culturally, roughly speaking, it started with the Tate-Labianca murders on August 8 and 9,1969, the Altamont Free Concert on December 6, 1969 and the breakup of The Beatles on April 10, 1970 and ended with Disco Demolition Night

on July 12, 1979, the murder of John Lennon on December 8, 1980, and the launch of MTV on August 1, 1981. The most representative years are 1972 through 1978; the years before that still have some baggage left over from the '60s (and, in some cases, even the '50s), while in about 1977 the tropes begin to shift — the sideburns got shorter, mass entertainment (movies especially) moved in the direction of pure escapism for the first time since the mid-'60s, the "women's lib" movement went mainstream and lost most of its earlier radicalism, and the (then) avant-garde musical styles of punk, New Wave, heavy metal, Industrial and (to a lesser extent) rap started to slowly eclipse the more proletarian or petit bourgeois styles of hard rock, R&B, and soft pop. Much of the sleaze and cynicism of the earlier part of the decade also began to fade by this time: while disco is sweeping the nation, the Watergate legacy is repudiated by the election of the almost ridiculously idealistic and pure-hearted Jimmy Carter as President, and the rise of the Moral Majority within fundamentalist and evangelical Christian sects does a creditable job of rolling back (for a time, and to a degreenote And never with really great success until AIDS scared the shit out of everyone in the mid-'80s) the sexual carnival of the '60s. But, needless to say, neither lasted beyond 1979 (the Carter administration, if not dead on arrival, clearly died with the Iranian hostage crisis), setting the bases for the turbulent 1980-1985 period.

A convenient Butt-Monkey or Hate Sink for modern observers, being with the 2000s the decade everyone loves to hate (or hates to love), although some consider The Roaring '20s, The '50s and The '80s to be Old Shames as well. It doesn't help that other "uncomfortable" eras like The Great Depression, The '60s and The Nineties have had their redeeming qualities. In later decades however, there have been attempts to rehabilitate the time period in the public mind by portraying more of its liberalism and cultural diversity.

Works that are set (but not made) in this time period are:

Works that were made in this time period:

Alternative Title(s): The Seesaw Seventies, The Me Decade