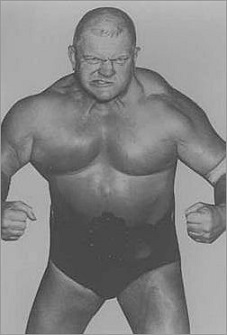 William Afflis (1929-1991) was an American football player and Professional Wrestler from Indiana as Dick the Bruiser. He made his name competing primarily in the Midwest, for various National Wrestling Alliance territories, for the AWA and his own World Wrestling Association in Indianapolis from 1954 until he retired in 1985. He is particularly well known for his many years teaming with The Crusher (Reggie Lisowski). He also competed for All Japan Pro Wrestling and made some appearances for Capitol Wrestling, the precursor to WWE. The most infamous was on November 19, 1957, which saw a genuine wooden chair throwing riot break out due to Dr. Jerry Graham bloodying Antonino Rocca following Rocca and Edouard Carpentier's win over Bruiser and Graham. After he retired, he worked for WCW as a talent agent. Among his in-ring achievements, he was a 1x AWA World Heavyweight Champion

with the Crusher, and a 1x NWA International Tag Team Champion

with the Crusher. He was inducted into the Wrestling Observer Newsletter Hall of Fame in 1996.

"The World's Most Dangerous Tropes":