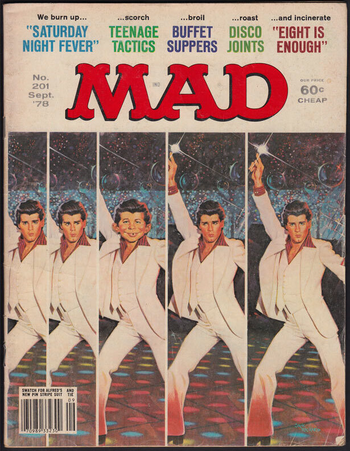 A Stock Parody and Stock Pose, when somebody dances in fiction, they're likely to mimic John Travolta's iconic pose from Saturday Night Fever, with their arm stretched out and hand pointing toward the sky. When licensed music is allowed, it's usually combined with "Staying Alive" by The Bee Gees — except for Saturday Night Fever itself in which Travolta dances to "You Should Be Dancing".
Advertisement:

Mario dances in this pose with a Disco Ball Thing in the background.

Mario dances in this pose with a Disco Ball Thing in the background.