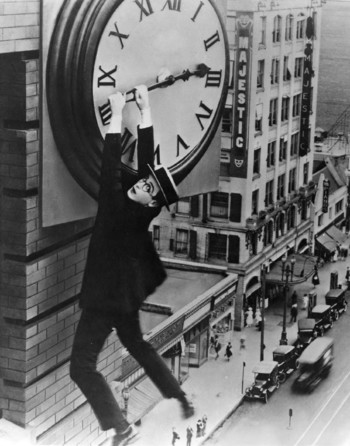 Looks like Harold's got time on his hands.
Advertisement:

Our characters get themselves into a very precarious, dangerous situation. They try to flee from danger and often they have no choice but to climb up in a cool Clock Tower and the showdown happens atop.

Invariably, they find themselves clutching a giant hand of the enormous clock and eventually they are hanging by their fingertips. The clock hands are usually big enough to sit or stand on, but as the clock hands move, people are in danger to slide off of them. The movement of the hands is used for dramatic tension as they slowly tick into a position that will dump the character off to his doom. It adds moment of drama as they are hanging on for dear life as the hand slowly turns until they'll have no choice to slide off the hand and fall off. Sometimes this effect is used by the villain as a deathtrap.

This trope makes for a great drama during a chase scene, fight scene or any other showdown. And it's visually stunning. The very iconic image from the Signature Scene of Safety Last! is the Trope Maker, and it's one of the most recognisable images of the silent era of movies. Lots of examples of this trope are a direct homage to the movie.

Aladdin hangs off the big hand of the Palace of Westminster's Great Clock while trying to play catch-up with the Guiding Star.

Aladdin hangs off the big hand of the Palace of Westminster's Great Clock while trying to play catch-up with the Guiding Star.