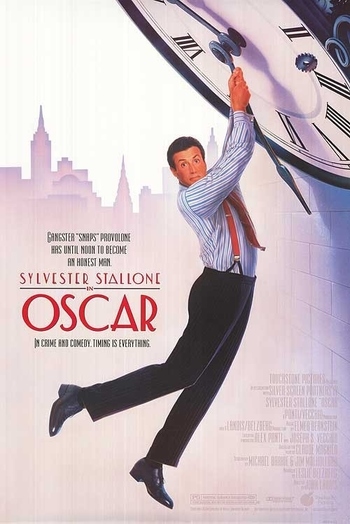 Hmmm... this looks familiar.
Connie: Your daughter's not your daughter, and the cash that used to be your jewels is now your underwear!
Snaps: Now you've got it!
Connie: I got it! (beat) I don't even know what I'm talkin' about!
Advertisement:

An adaptation of Oscar, a screwball farce by Claude Magnier. The original is about an industrialist trying to get back the money one of his employees stole and the resulting complications. This adaptation moves the action to 1920s America and makes the industrialist a mobster trying to go straight, adding an extra complication to the plot.

Not to be confused with the 1967 film Oscar (an earlier adaptation of the same play) or the 1966 film The Oscar (an unrelated work about the contest for an Academy Award).

The 1991 film provides examples of the following tropes: