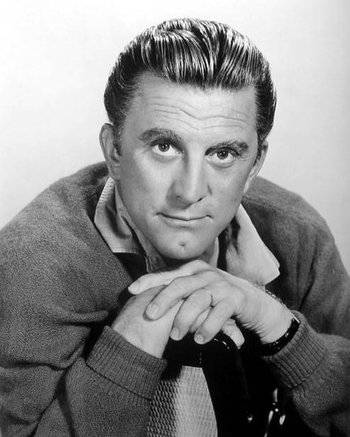 "All children are natural actors, and I'm still a kid. If you grow up completely, you can never be an actor."
Advertisement:

Kirk Douglas (born Issur Danielovitch Demsky; December 9, 1916 – February 5, 2020) was a famous American actor and producer, who started his career in The Golden Age of Hollywood and remained active for roughly half a century.

The young Issur grew up in poverty in Amsterdam, New York. His parents were Jewish immigrants from Chavusy, Mogilev Region, in the Russian Empire (present-day Belarus), who fled pogroms. While studying at the American Academy of Dramatic Arts in New York City, he met one Betty Joan Perske, who would greatly help him launch his career in the movie industry.

Known for depicting tough, square-jawed men and once quoted as saying he "made a career out of playing sons of bitches"; actually quite nice in real life (depending on who you ask). Had something of a Large Ham reputation, though he proved that he could tone it down and still act pretty well. Often tag-teamed onscreen with Burt Lancaster, though some sources claim the two men strongly disliked each other. Following the example of Lancaster, Kirk created his own production house, Bryna Productions (named after his mother) in 1955.

He also played a very important role in ending The Hollywood Blacklist going on in the film industry during the '50s and '60s, most notably by defending the screenwriter he chose for Spartacus, Dalton Trumbo. His career was largely ended by a stroke that permanently affected his speech in 1996. He was one of the last living legends from the Golden Age of Hollywood, eventually passing away at age 103 in 2020. More details about his life can be found in his autobiography, The Ragman's Son.

He is the father of Michael, Joel, Peter and Eric Douglas.