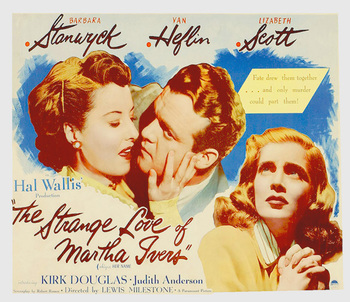 Femme Fatale on the haunt.
The Strange Love of Martha Ivers (1946) is a Film Noir directed by Lewis Milestone with a star-studded cast including Barbara Stanwyck, Van Heflin, Lizabeth Scott, and in his film debut, Kirk Douglas.
Advertisement:

It’s a dark and stormy night, and Martha (Stanwyck) hates being ruled by the iron fist of her aunt, Mrs. Ivers (Judith Anderson), so she runs away with the help of her friend, Sam Masterson (Heflin). They’re found out, unfortunately, because of Walter O’Neil (Douglas), her tutor’s son. Sometime later, Sam sneaks by the house and tries to help Martha escape again. Then the lights go out due to the storm. Hearing a noise made by Sam trying to sneak out, the old aunt comes out to find Martha’s cat meowing on the stairs. Hating the little thing, she starts beating it to death with her cane. This angers Martha, so she grabs the cane and strikes her aunt, making her tumble down the stairs and die. Walter is Martha’s only witness, and he’s coerced to lie for her.

Seventeen years later, Martha and Walter are married, and it’s obvious that Martha wears the pants in the relationship and has never loved innocent Walter; she’s just bound to him for knowing her dark secret.

Sam turns up in town, frightening both Walter and Martha, as their status can be destroyed with only one word from him. Sam, on the other hand, just wants to help his friend, Toni Marachek (Scott), shake off her probation problems.

But jealousy, spite, and love whirl together to create a dirty remembrance of the past, and it isn’t pretty to watch.

Miklós Rózsa composed the score. This film is in the public domain