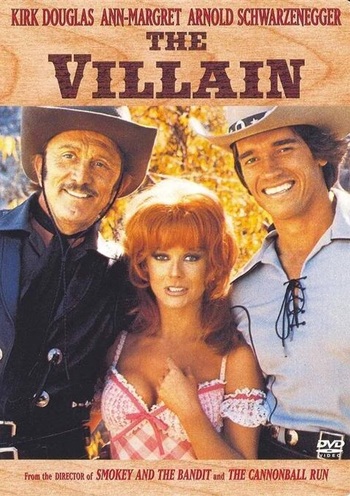 The Villain, aka Cactus Jack, is a 1979 live-action western comedy directed by Hal Needham (of The Cannonball Run and Smokey and the Bandit) that parodies Western movies in general.

It stars Arnold Schwarzenegger as Handsome Stranger (yes, it's his actual name—he was named after his father), who is escorting Charming Jones (Ann-Margret) so that she can claim money left by her father, Parody Jones (Strother Martin). Avery Simpson (Jack Elam), the corrupt town boss forced to hand the money over, wants it back and so hires/conscripts an inept outlaw named Cactus Jack Slade (Kirk Douglas) and Slade's super-genius horse Whiskey into stealing it back. What then unfolds is literally a live-action Roadrunner cartoon.

No relation whatsoever to the wrestler Mick Foley.