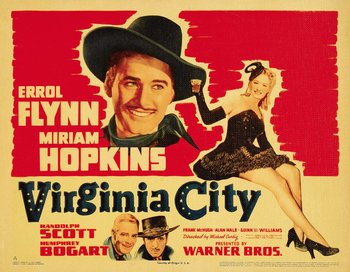 It is the closing months of the Civil War. Confederate officer Vance Irby (Scott) has a wacky idea to rescue the waning fortunes of the South. He will journey to the mining boom town of Virginia City, Nevada

, make contact with Southern miners known to be sympathetic to the Confederate cause, and acquire $5 million of gold that they are holding. This huge fortune will turn things around for the South.

Also sent to Virginia City is Union agent Kerry Bradford (Flynn), who somehow also knows about the gold stores being held by Confederate sympathizers. His job is to stop the plot and retrieve the gold for the American government. On the stagecoach to Virginia City he meets the ravishing Julia Hayne (Hopkins), and they fall in love during the cross-country voyage. What Kerry doesn't know is that Julia is a Confederate spy who is helping her old friend Vance to smuggle all that gold to the Confederacy.

Humphrey Bogart joined the What The Hell, Casting Agency? Hall of Fame when he appeared in this film as John Murrell, Mexican bandito. Max Steiner composed the music.