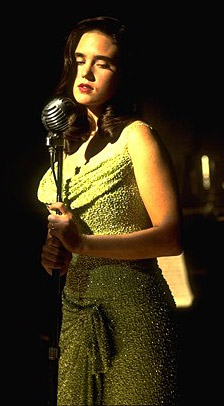 A stock character in anything even very loosely inspired by Film Noir, and often the first thing that comes to mind when people hear the word "Femme Fatale".

Every lounge will have a sultry female singing a sultry song (or Torch Song). Her favorite outfit is a long evening gown with a slit up the side, pearl necklace, and more than likely high heels and opera gloves. At some point, she will probably be seen Sitting Sexy on a Piano. If she becomes a named character, she will often be the Veronica in a Betty and Veronica romantic subplot. She could also just be there in the background because every lounge that has anything approaching a Film Noir feel must have this trope.

She is always surrounded by an air of melancholy. This could be because she herself is melancholic, or because the lonely male hero experiences a connection with her while she is singing but cannot have her. She tends to be out of the main hero's reach perhaps because she is a dangerous Femme Fatale, because she is already involved with someone else (usually a villain), or simply because she is so aloof. This character can be very useful for highlighting a feeling of loneliness, because her sultry songs will often create a feeling of a connection between the singer (which it means in French) and the listener, but circumstances will prevent that feeling from becoming a true connection. For that reason, this trope is a favorite of Film Noir, a genre that thrives on a feeling of melancholy and stoic loneliness.

The rarely seen male version is known as a chanteur. It's also possible for a male Crossdresser to play the role in drag; in such cases, he's likely to be Camp Gay, and (unless it's played for laughs) attractive when made up as a woman. A full-blown Drag Queen probably isn't a straight example, but may often want to invoke the trope's imagery in his own performances.

A saloon singer may fill a similar role in Westerns, and a comely barmaid singing Irish ballads and sentimental songs may take the role in an Irish pub (be it in Ireland or, at least as often, abroad) Compare Glamorous Wartime Singer, Lounge Lizard.