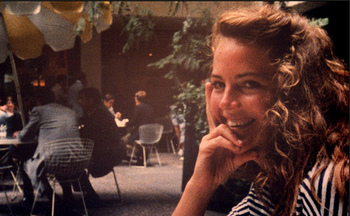 Sherman's March is a 1986 autobiographical documentary film written and directed by Ross McElwee.

As McElwee himself explains onscreen, the film was originally meant to be a documentary about, yes, William Tecumseh Sherman's march to the sea

through Georgia in late 1864, and his follow-up march through the Carolinas

in early 1865, which concluded with Confederate surrender and the end of The American Civil War. His original idea was to retrace Sherman's route and document the lingering effects of the campaign on the area.

However, shortly before McElwee was to start his project, his girlfriend up in New York dumped him. McElwee finds himself unable to focus on his topic, and instead winds up documenting his own life instead. Specifically, he documents his disaster of a love life. As McElwee more or less retraces Sherman's route, he meets various women and becomes enchanted by them, only to be rejected. The film becomes a meditation on Southern womanhood, and McElwee's romantic frustrations, while also still touching on William Sherman's life and career.