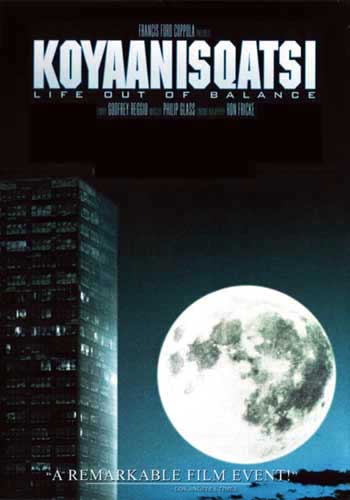 "You've never really seen the world you live in."
Advertisement:

Koyaanisqatsi is a 1983 Godfrey Reggio film. There is no obvious plot or story, no actors, and no dialogue. The whole film is just time-lapse footage of nature, people, and machines with music composed by Philip Glass.

Despite the synopsis sounding dull, the film is mesmerizing. The film starts with beautiful footage of the desert and natural rock formations. From there, human work is more and more evident. The middle section of the film is about the hustle and bustle of modern life. Towards the end, the film focuses on people of different walks of life. The last sequence is a failed rocket launch in slow motion.

It is the first part of a "qatsi" trilogy, it is followed by Powaqqatsi and Naqoyqatsi.

If the name sounds familiar, the title song is used whenever the Janitor delivers a Death Glare. The pieces "Pruitt-Igoe" and "Prophecies" that were written for this film are probably better known to the current flock of 20-to-30-somethings as the accompaniment to Jon Osterman's transformation into Dr. Manhattan in the Watchmen film adaptation, or from the first Grand Theft Auto IV trailer. "The Grid", however, is the best

-known piece, both visually and aurally. Fans of The Truman Show will instantly recognize The Anthem

Reggio's cinematographer Ron Fricke went on to make Chronos (in IMAX), Baraka, and Samsara, all of which have obvious similarities to the "qatsi" films.

"Tropes out of balance":