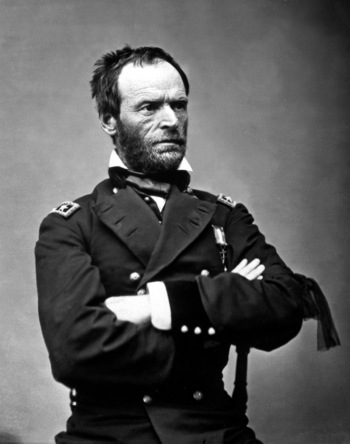 "You cannot qualify war in harsher terms than I will."
"I confess, without shame, I am sick and tired of fighting—its glory is all moonshine; even success the most brilliant is over dead and mangled bodies, with the anguish and lamentations of distant families, appealing to me for sons, husbands and fathers ...'tis only those who have never heard a shot, never heard the shriek and groans of the wounded and lacerated ... that cry aloud for more blood, more vengeance, more desolation."
—William T. Sherman, personal letter, May 1865
Advertisement:

William Tecumseh Sherman (February 8, 1820 — February 14, 1891) was an American general who served the United States during the American Civil War. He is most famous for creating the modern ideal of "Total War" (though later militaries would far outdo him in this regard; for instance, Sherman famously forbade his men from killing civilians, the Nazis didn't) and his infamous March to the Sea from Atlanta, Georgia, to the port of Savannah, in which his men took everything that was even remotely useful to their war effort, and destroyed whatever wasn't; this included killing all livestock they encountered, burning plantation houses, freeing slavesnote Sherman was not an abolitionist, and even prevented a large number of runaway slaves from following his army across a river—though sadly, he had a practical reason for doing this: there was little forage his men could gather from the area, and he prioritized feeding his men over anything else, and wrecking farming equipment. In his later years, he was considered as a nominee to run for President, but he flatly refused to even consider such a thing, saying "I will not run if nominated and will not serve if elected." His professionalism towards defeated Confederates was such that even men who had directly opposed him greatly respected him, despite the general attitude of much of the South. In particular, General Joseph E. Johnston, who had led the unsuccessful campaign to stop the March to the Sea, served as a pallbearer at Sherman's funeral in February 1891. When advised to wear his hat to prevent illness, Johnston refused, saying "If I were in his place, and he were standing in mine, he would not put on his hat." (Johnston would in fact become sick and died a month later from pneumonia).

In pop culture, he is a man who brings about a lot of mixed feelings. To many in the South, he is seen as a monster who destroyed while his men raped, looted and pillaged Georgia and North and South Carolina, though this is somewhat hypocritical on their part, as Confederate general Jubal Early

conducted similar campaigns out of petty spitenote When burning Chambersburg, Early said it "made a good fire", and he had random civilians killed if they didn't have any money or if they harbored anti-slavery sentiments, with one man being murdered simply because he taught blacks how to read, and Stonewall Jackson advocated using the exact same tactics to get the Union to surrender faster—and all before Sherman conducted his March. To others, particularly in the North, he was a brilliant man with a pragmatic command manner who helped end the civil war quicker and ensured the Union's survival and slavery's end, along with General Grant and Abraham Lincoln.

Sherman was later involved with the Indian Wars starting in the wake of the civil war, where at one point he advocated pursuing the Sioux to the point of exterminating them all in a letter to Grant. He was appointed Commanding General of the US Army in 1869 when Grant became President, and with that role oversaw the native tribes' later defeat and their surrenders. Despite this, he spoke out in opposition to Indian agents' mistreatment of native people then living on the reservations. He expressed regret for his racist views in his later years and argued for enfranchisement of African-Americans. He never expressed regret for his March, though, bluntly declaring that the Confederates brought it upon themselves for starting the war in the first place.

Trope Namer for War Is Hell, from a speech that Sherman, disdainful of military glory, gave at a military academy's graduation ceremony. (On another occasion he also said "War is cruelty, and you cannot refine it.")