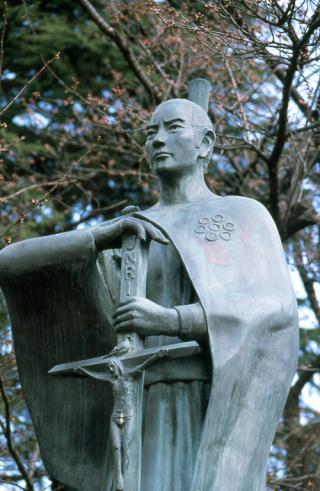 "The Samurai of Christ"* Statue of Dom Justo in Plaza Dilao
Advertisement:

Dom Justo Takayama Ukon (1552 Haibara-cho, Nara, Japan – February 4, 1615, Manila, Philippines), otherwise known as: Takayama Ukon-no-Tayu, Takayama Nagafusa, Takayama Shigetomo or Takayama Hikogoro is quite probably the most famous Christian samurai in the history of Japan, and indeed, whenever a Christian Samurai appears in fiction, they tend to be based on him to some degree.

Son of Takayama Tomoteru, and heir to the Takayama family, his path as a Christian began when his father, after several long talks with a Roman Catholic missionary, decided to convert to Christianity. His family followed suit - young Hikogoro Takayama was thus baptised at roughly twelve years of age* Historians disagree on the precise year and chose for his Christian name Justo, meaning "righteous". In an ironic twist of events, his father would abandon Christianity later in his life, while Dom Justo would remain firmly Christian until his death.

Like all Japanese nobles, he took different names at different times of his life. "Dom" is a Portuguese honorific akin to "Don" in Spanish and Italian, meaning "sir" or "lord". "Ukon" is itself an abbreviated title roughly meaning "captain" which he adopted later, along with the given name Nagafusa. Earlier he had received the name Shigetomo upon coming of age. "Ukon" was sometimes further coupled with the honorific "-dono" meaning "lord", so Europeans (including the Pope) sometimes referred to him as the linguistically redundant "Dom/Don Justo Ucondono".

Since his youth, Dom Justo lived in an age of strife: The Sengoku ("Warring States") Period of Japanese history. The Takayama family lost its castle in a siege against the Myoshi, and subsequently fled, finding protection under the service of the Wada family, who in turn served Oda Nobunaga (historians get a kick of pointing out the Holy Samurai fought for the Demon Emperor). But the Takayama's fortunes didn't seem to improve: after fighting proudly alongside their masters, the Wada, the Wada patriarch fell in battle amidst a siege, and unfortunately for the Takayama, his son did not like the Takayama and plotted to have them killed.

This decision proved to be his last. Tomoteru Takayama struck a deal with his enemies, the Araki, killing the Wada heir and claiming all his lands and possessions. Dom Justo himself led the 15-samurai squad which struck him down. Oda Nobunaga didn't bat an eye.

...Until the Araki revolted against Oda Nobunaga, and the Takayama with them. Nobunaga besieged the castle Dom Justo held and knowing Dom Justo was a devout Christian, threatened to murder every single Christian in the area and torch the churches. Dom Justo, unwilling to risk Christian lives, surrendered against his father's wishes and defected to Oda Nobunaga's side (while his father essentially threw his hands in the air and retired). He would remain the rest of his warring career fighting for Nobunaga, ascending to become one of the most respected generals of his army.

Under his wing, Christianity expanded and flourished, and he acquired the amusing moniker of "Samurai Pope" as he went about building Churches and becoming a bastion for Christianity in Japan for a brief period of time. It is said around 18,000 men (not counting his own Samurai and retainers) were converted under his rule (Some historians believe forcefully so, but there's no evidence to back this claim). After Nobunaga's death, Dom Justo marched alongside Toyotomi Hideyoshi with distinction in several conflicts, acquiring his utmost admiration (despite later events) and being held in high regard as a valuable general and fierce warrior, fighting in the Vanguard with ferocity to make him a legend.

That is until Hideyoshi decided Christianity was a problem. He ordered all Christians to abandon their faith, Dom Justo included. Dom Justo refused and preferred instead to be stripped of his lands, titles and wealth and become an outcast rather than abandon his faith. He lived the rest of his life fleeing persecution across the country, a renegade exile, protected only by those sympathetic to his plight (such as Konishi Yukinaga and Maeda Toshiie, whom he served faithfully in exchange of shelter). He lived the rest of his life in relative poverty.

Christianity was then ultimately outlawed and all open Christians forced to leave Japan. The old, malnourished Dom Justo peacefully followed this edict (despite some of his contemporaries fearing he would fight) and went to exile, alongside his family, to the Philippines, where he was received as a hero. Sadly the trip, plus his age, took a toll on his health, and he died a month later.

Currently in the fast track to become a saint of the Catholic Church. If this happens, he'll be the first samurai saint of all time.